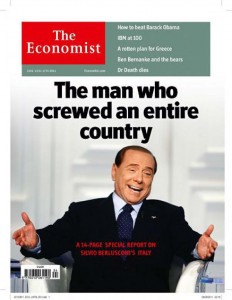 «Yet despite his personal successes, he has been a disaster as a national leader—in three ways.
Two of them are well known. The first is the lurid saga of his “Bunga Bunga” sex parties, one of which has led to the unedifying spectacle of a prime minister being put on trial in Milan on charges of paying for sex with a minor. The Rubygate trial has besmirched not just Mr Berlusconi, but also his country.
[…]
Worst by far has been a third defect: his total disregard for the economic condition of his country.
[…]
As our special report in this week’s issue points out, only Zimbabwe and Haiti had lower GDP growth than Italy in the decade to 2010.
[…]
All these things are beginning to affect Italy’s justly acclaimed quality of life. Infrastructure is getting shabbier. Public services are stretched. The environment is suffering. Real incomes are at best stagnant. Ambitious young Italians are quitting their country in droves, leaving power in the hands of an elderly and out-of-touch elite. Few Europeans despise their pampered politicians as much as Italians do».